the Ploughman's Pickle - Scarlett & Mustard
Free delivery for orders over £50 to mainland UK. 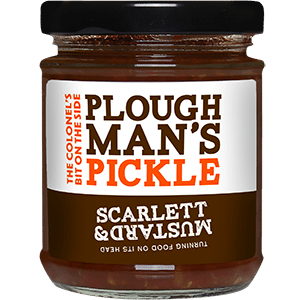 In a bit of a Ploughman’s Pickle with the Recycling!

HIGHLIGHT OF THE WEEK: Making twice as much room in the recycling bin by getting into it and doing the salsa!

LOW POINT OF THE WEEK: Discovering that my son’s bedroom is now a full scale landfill site, therefore making me a BAD MOTHER. 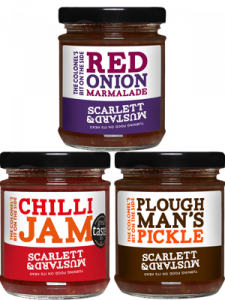 DRIVEL OF THE WEEK:

When I decided to find out exactly where the traditional Ploughman’s Lunch came from, I thought I would be writing about how this simple farmer’s meal had been passed down through the centuries and was based on the contents of a farm-hand’s trouser pockets – eugh! However, did you know that it was dreamed up by the Milk Marketing Board in the 1960s to promote the sale of cheese, particularly in pubs? Just as well, because if my son’s pockets are anything to go by (although he isn’t one for farming) the contents of a Ploughman’s Lunch could be made up of any of the following: paperclips, boiled sweets covered in fluff, empty sweet wrappers, old chewing gum, snotty tissues, broken pencils and in Colonel Mustard’s case – a guitar pick!

QUOTE OF THE WEEK
“He looks as though he’s been weaned on a pickle”
– Alice Roosevelt Longworth, Daughter of US President, Theodore Roosevelt

RECIPE OF THE WEEK
Create a delicious Ploughman’s Lunch of crusty bread, a really strong cheddar, a tasty apple, maybe some ham, perhaps a Scotch Egg and of course our Ploughman’s Pickle and place on a plate. #YumYum