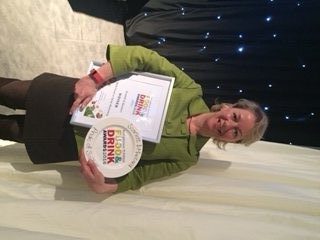 HIGH POINT: Enjoying a delicious lunch at Kesgrave Hall on Monday, oh yes and winning two Awards in the EADT Suffolk Food & Drink Awards! We won Pride of Suffolk and Best Food Marketing. Over the moon!

LOW POINT: Realising my double chins are well and truly a fixture after seeing all the photos in the EADT yesterday! 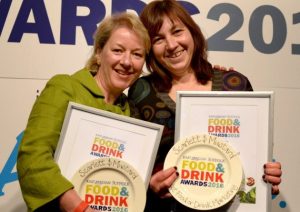 I did manage to come up with something quite sensible to say though on receiving our Awards, thank goodness!  I heard myself saying ‘Food should taste like it did when you were a child’.  This is so true and so important. The products we make here are based on memories – memories of my childhood (some of the secret recipes were actually lifted from my mother’s own recipe book), my Grandmother’s childhood, my husband’s childhood and my children’s favourite tastes.

“Food should taste like it did when you were a child.”

The most exciting Award of the day was the surprise ‘Food & Drink Hero’ Award which went to Jimmy Butler of Blythburgh Free Range Pork and was so justly deserved.  Jimmy’s son, Alastair, speaking at last night’s launch of The Framlingham Sausage Festival said how important sausages were to the food industry. Having just googled the statistics I can tell you that a whopping 181,853 tonnes of sausages were consumed in 2014. Perhaps it is the actual sausage which is the food hero! So much of our yummy stuff goes perfectly with sausages, especially our Chilli Jam, Onion Marmalade and Ploughman’s Pickle!  And of course, let’s face it Colonel Mustard loves a little bit of Chilli Jam on his sausage.

RECIPE OF THE DAY
For tonight’s supper look no further than Blythburgh Free Range Pork Sausages served with our yummy Red Onion Marmalade.