Ingredients:
Meringues (makes 18 small meringues):
4 large egg whites
115g caster sugar
115g icing sugar
Filling:
Rhubarb & Vanilla Curd
Sour cream
To decorate:
Rosehip ‘flakes’
To make the meringues:
Preheat the oven to 100°C. Line two baking trays and set aside.
Break four large egg whites into a large mixing bowl, using an electric whisk, beat until fluffy. Carry on whisking while adding a tablespoon of caster sugar at a time with around 4 seconds between each spoonful. After all the caster sugar is added the mixture should be thick and glistening.
Next, sift one third of the icing sugar and fold into the mixture, continue to sift in the rest of the icing sugar. Do not over mix.
Use a spoon to create small moulds of meringue on the baking trays then wet the spoon to make small dips in the top of each mould. Bake the meringues for one and a half hours and the cool on a baking tray.
To make the filling:
Stir together the Rhubarb & Vanilla Curd and Sour cream until smooth.
Once the meringues are cool, dollop on the filling in the dips then sprinkle over a few Rosehip flakes.
Go Back 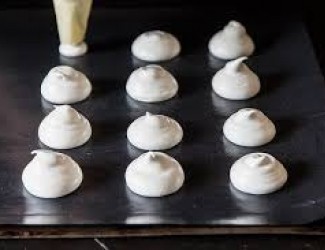