We are desperate for more - they're scrummy!
Jennie, London

Now I used the lime and mint curd from S&M in this recipe but I bet my pinny that the toffee apple and lemon versions would work here too.  I also think the chili jam could be good, I accidentally got some in a brownie mix once and it ended up being amazing so try mixing the jam in some melted chocolate and stuffing that in the donuts instead.  But today, I am using Lime & Mint.

The end product made me think of a mojito due to the lime and mint flavours, plus the rum in the sauce.  It also brought to mind those mint chocolate éclair sweets from my younger days, less the toffee of course (but if you used the toffee curd it would be spot on).  I don’t think you can get them anymore though, seems only orange and regular remain on the shelves but I certainly remember them as a child so this had an added air of nostalgia.

It’s also quite a simple recipe so a good one for getting kids involved (you just might want to leave the rum out of the chocolate sauce).  And it is absolutely fine to just go out and buy a pot of chocolate sauce and just chuck in the rum (or not).  No one will judge (and if you keep quiet, no one will notice).

This made 15 donuts.  Don’t worry if they don’t look perfect, mine didn’t and were not all the same size, and no one cared.  Once they are dunked in the sauce you can’t tell anyway.

Once baked and all risen and lovely and golden you could freeze them for up to a month, defrosting when you need them.  But if there are any spare I will be very surprised!

250g plain flour (sifted if you have time, not essential if you don’t)

3.5g of fast action yeast (I used half a packet sachet which are usually 7g)

50g of melted butter (plus extra for serving)

2.      Mix the flour, yeast and sugar in a large bowl with a pinch of salt and combine well.  Make a well in the centre.

3.      Whisk together the melted butter, warmed milk and egg yolks in a bowl.  Be careful not to have the butter and milk too hot to avoid scrambling the eggs.  Pour into the well and, using a metal palette knife, combine.  You should end up with a rough, wet dough.

5.      Oil a work surface and your hands and tip out the dough.  Kneed for around 5 minutes until it is smooth and springy.

6.      Place in an oiled bowl, cover and leave somewhere warm for around 2 hours (the dough should double in size).

7.      Another quick kneed and then shape into balls, about walnut sized, and place on a baking sheet making sure there is a good space between them.

8.      Cover the shaped balls and again leave to rise for between 30-60 minutes.  If you poke one and the dough doesn’t spring back then they are oven ready.

10.  Mix a little extra sugar with the cinnamon (if using) and brush each donut with a little melted butter then roll in the sugar.

11.  Poke a hole in the bottom of each donut and, using a 5mm nozzle piping bag or cooking syringe, squeeze in the lime & mint curd.

13.  Serve the donuts still hot, alongside the warm chocolate sauce.

For more of Lisa’s amazing recipes and tasty serving suggestions see her blog: https://arestaurantathome.wordpress.com/ or follow her on twitter: @intrepidveggie 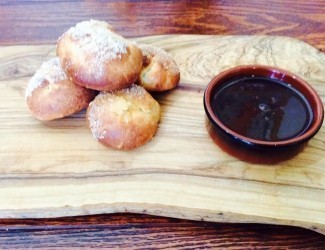