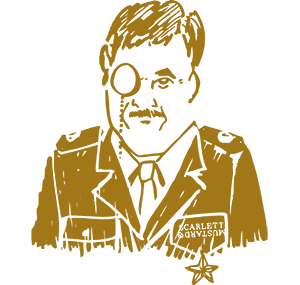 Sandy and Julian, co-founders of Scarlett & Mustard, met 6 years ago, with no idea of what the future held for them, or of an extraordinary coincidence that was to be uncovered…

Shortly after meeting, they discovered that Sandy’s Grandfather, Lt. Percy Watson, and Julian’s Great Uncle, 2Lt. Thomas Pollard, both fought in the Leicestershire Regiment – “the Tigers” – in the First World War. They also discovered that they were not only in the same Regiment,  but the same Battalion and were wounded within weeks of each other during the same campaign.

Scarlett & Mustard therefore have a very close and personal connection to WW1.

This is the inspiration for The Colonel’s Poppy Seed Dressing. A dressing conceived in memory of their relatives, and indeed all those who have fought, been wounded or killed in defence of their country.

So please help us in this year’s very special commemorations by supporting The Royal British Legion, and take a bottle home. It’s so delicious that they hope you’ll keep coming back for more.

A dressing to remember

20% off your first order