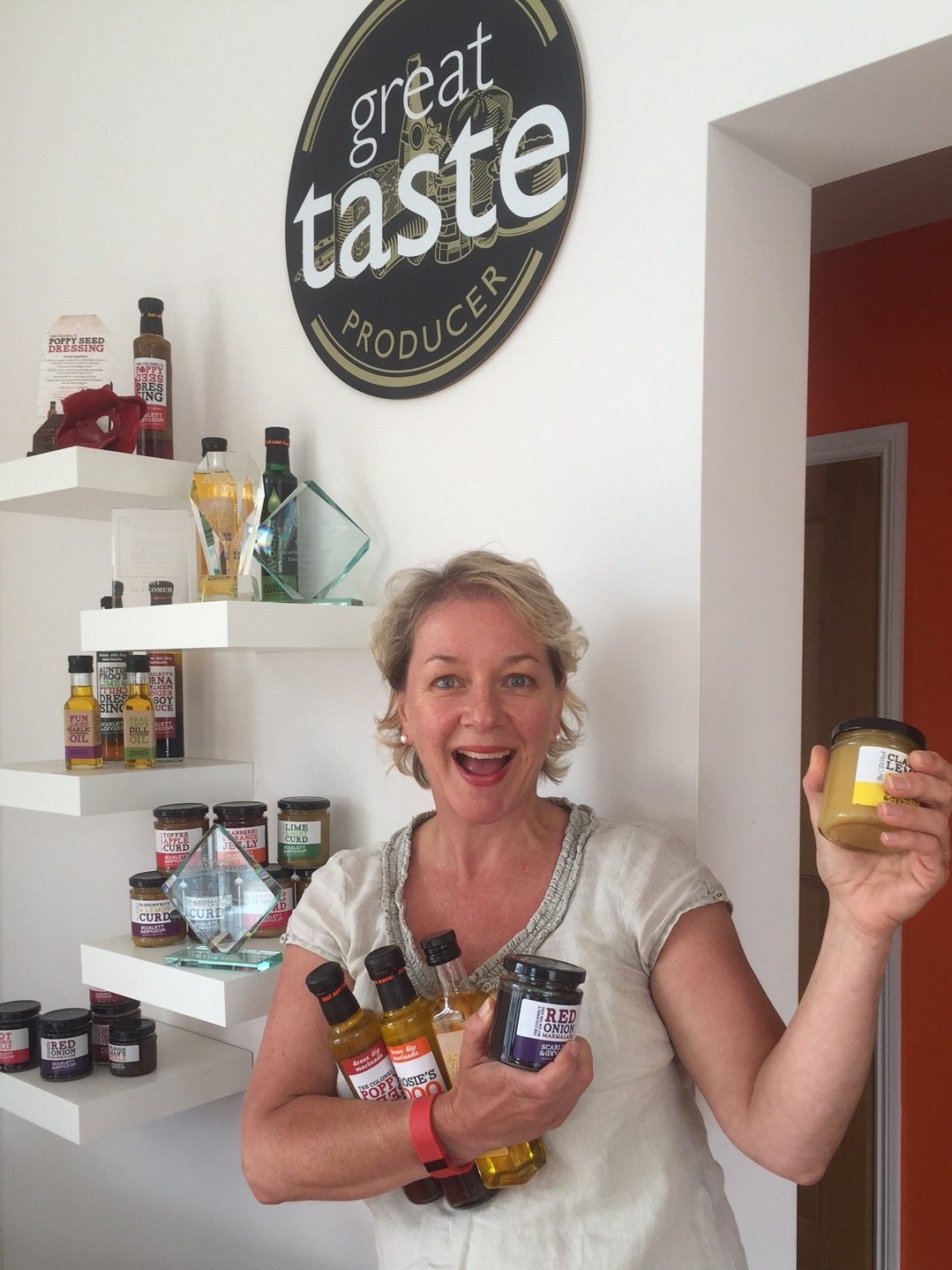 Yesterday we found out that we had won 5 Great Taste Awards and we are over the moon – can’t stop smiling!!  This afternoon Sandy was invited onto BBC Radio Suffolk to talk to presenter Lesley Dolphin about the win!

This takes Scarlett & Mustard’s total tally of Great Taste Awards to an amazing 21! Judges’ comments included high praise for the ‘delightful levels of flavour…’ of our Extra Virgin Cold Pressed English Rapeseed Oil and made particular mention of the ‘rich zingy lemon flavour with tangy finish’ of our Classic Lemon Curd. They described The Colonel’s Poppy Seed Dressing as having ‘a good fresh flavour’, they commended Rosie’s Doo Dah Balsamic Vinaigrette for its ‘good balance between the sweet vinegar and the unctuous oil’ and said that our ‘Red Onion Marmalade’ was a pleasant surprise’.

Sandy Ruddock, founder of Scarlett & Mustard spoke of our excitement at winning more Great Taste Awards, ‘We are absolutely over the moon! To have won 21 Great Taste Awards since 2012 is just fantastic and makes all the hard work worth it. We’re particularly proud of our curds (known to us as The Curd Hurd) as ALL 8 of them now have Great Taste Awards! It’s been a fantastic month here because the Great Taste Awards have followed hot on the heels of us winning the EADT Small Business of the Year Award in July. Wow!! What an amazing year so far! We will definitely be celebrating this weekend and then it will be back to work on Monday to make more dressings!”

Judged by over 500 of the most demanding palates, belonging to food critics, chefs, cooks, restaurateurs and producers as well as a whole host of food writers and journalists, Great Taste is widely acknowledged as the most respected food accreditation scheme for artisan and speciality food producers. As well as a badge of honour, the unmistakeable black and gold Great Taste label is a signpost to a wonderful tasting product, which has been discovered through hours and hours of blind-tasting by hundreds of judges.

There were 10,000 Great Taste entries this year and of those products, 141 have been awarded a 3-star, 878 received a 2-star and 2,520 were awarded a 1-star accolade. The panel of judges included; TV chef and author, Valentine Warner, MasterChef judge and restaurant critic, Charles Campion, fifth generation baker, Tom Herbert from Hobbs House Bakery, and Great British Bake Off winner, Frances Quinn; food buyers from Harrods, Selfridges, Fortnum & Mason, Harvey Nichols and Waitrose and chefs including, James Golding, chef director of THE PIG Hotels, and Kevin Gratton, chef director of HIX Restaurants. These esteemed palates have together tasted and re-judged the 3-star winners to finally agree on the 2016 Top 50 Foods, the Golden Fork Trophy winners and the 2016 Supreme Champion.